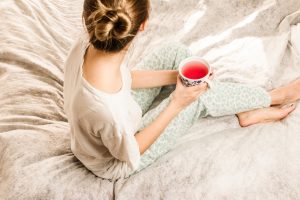 Have you ever tried drinking a hot cup of tea before going to bed because you couldn’t fall asleep? If so, you’re among the many people who have tried this ancient method. Some people prefer hot milk – others tea. But few people ever stop and think if this method really works. Although, the mere act of drinking a warm cup of tea is relaxing in and of itself… there are some ways you can bump up the *sleepiness* factor: that’s why in today’s article we’re discussing Nighty Night tea with valerian.

It’s a tasty type of tea that has been made with extract of valerian root. And you might’ve heard about valerian root before – it’s a herb that has been used for thousands of years (even the old Greeks recognized the sleep-inducing properties of the herb) to help people if they can’t sleep.

But does Nighty Night tea with valerian also work as well as taking the root? In this article we’re going to find out everything that you need to know about this special type of tea: we’re going to discuss the taste, if/how it works to help you fall asleep and of course some of the special benefits drinking this tea has over other regular variants.

Can Nighty Night Tea with valerian help you sleep?

First things first: many tea variants contain caffeine. And if you’re reading this then I assume you already know that caffeine interferes with your natural sleep mechanisms. Now, teas contain less caffeine then your regular cup of coffee (although a strong black tea can come close), so the effect is generally less noticeable.

Still, if there’s one thing I want you to take away from this article it’s this:

Do not drink teas with caffeine before bed. It will hurt your sleep more than it will help. Try herbal teas or rooibos.

It won’t come as a surprise that Nighty Night Tea does not contain caffeine. After all, why would a tea that is made specially for inducing sleep contain this anti-sleep compound?

Now that we’ve got that general tea tip out of the way, let’s zoom in more on Night Night tea with valerian.

Apart from the valerian root, there are also some other ingredients of this tea. Namely:

So as you can see it’s not just the valerian root at effect here. But, it is the main ingredient that the tea is based around and what it thanks it sleep-inducing effect to. So let’s dive deeper intro valerian root and why it works if you’re having trouble falling asleep. 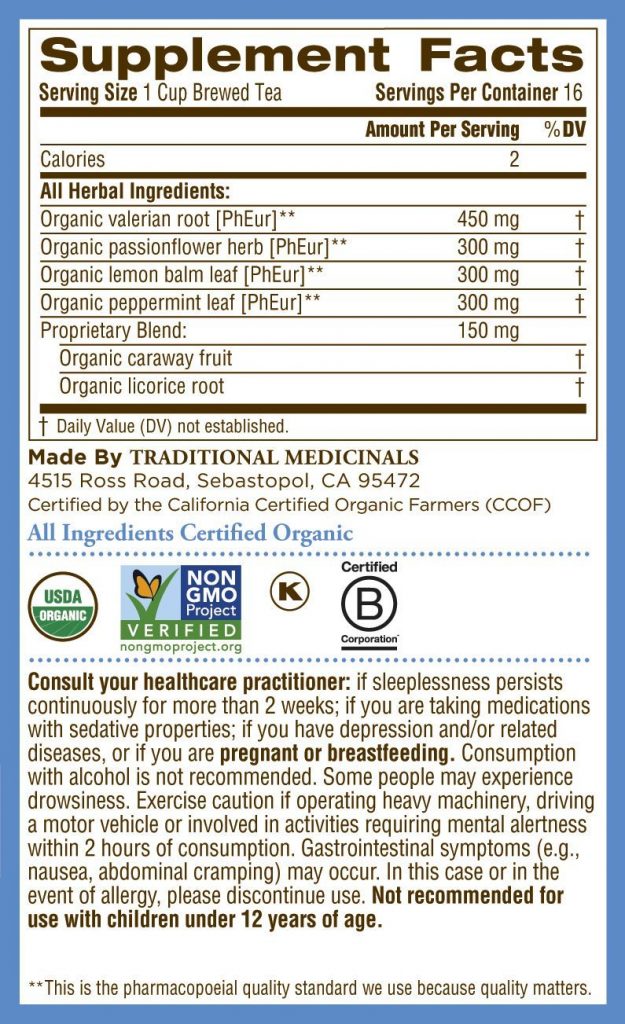 The science behind valerian

As we said earlier in the introduction, valerian has been used for thousands of years by people who had problems falling asleep. For centuries people have gathered the herb and traded it – many people made a fortune shipping it to places where it didn’t grow.

Now, it’s only recently that we have discovered the science why valerian root works. Although the fact that people used it for a long time with results is also something that has a lot of value in itself. But it’s still a good thing to quickly take a detour about valerian root and the science behind it. So in the following paragraphs you’ll find out some of the benefits of valerian and how they work for your sleep.

4 benefits of taking valerian before bed

This is the main reason thousands of people take valerian root daily at night: because it makes it easier for them to fall asleep. Studies have been done in Sweden and the effects of taking valerian root before bed were significant. After taking the herb 44% of participants reported that they had slept perfectly – while 89% of people said they had significantly slept better than normal. Also, there were no side effects reported.

Here’s a link to the study if you’re curious.

The reason why it works so well for sleep? Well, valerian root contains a specific chemical called linarin – which is known for its sedating effect. It helps your brain to increase the GABA level. And this is the brains inhibitory neurotransmitter. What that means is that it turns down the activity of your brain and promotes slower brainwaves– which is exactly what you need when you’re looking for a good night’s sleep.

It might not come as a surprise to you that the GABA neurotransmitter also has an effect on your anxiety. You see, popular anxiolytics also work by increasing this neurotransmitter. Think Xanax or valium. Only valerian root comes without the nasty side effects of those. A quick warning though: if you’re on calming medications of antidepressants – please watch out with taking too much valerian. It might interfere.

However, if you want to drink the occasional Nighty Night tea with valerian root to aid your sleep, you can do so without worries.

One of the reasons why it’s difficult for you to fall asleep at night might be because of excessive worrying or anxiety. Maybe you’re overthinking a situation at work where you said the wrong thing? Or you’re thinking about your future and all the possibilities stress you out? So it’s only a logical thing that you’re feeling stressed out about this. And this can have an impact on your sleep.

Valerian root will make you less anxious and this can have a surprisingly beneficial effect on how fast you’re able to fall asleep.

Unsurprisingly, the calming effects of valerian also help you to better handle stress. Now, if stress at night is a problem for you then there’s no doubt that it can impact your sleep. It’s important to de-stress in the evening before falling asleep. It will calm your mind and you’ll be able to peacefully sleep throughout the night.

Now, what better way to do this than to quietly sit down with a hop cup of tea? And add the beneficial effects of valerian root to the mix and you’ve got a potent anti-stress remedy at your hands.

And how does your day feel when you sleep well? A lot better and less stressful than when you can’t fall asleep and toss and turn through the night. It’s positive cycle that when you drink Nighty Night tea with valerian it will decrease your stress levels – which in turn make you sleep better – which reduces your stress levels. And this will then make you sleep better – which makes you better able to handle stress again.

So I’d say having a moment for yourself in the evening to de-stress is one of the vital habits that one can have in life. And why not make use of a good cup of tea with valerian root to make this moment even more relaxing?

Because of its beneficial effects on stress it also can help you lower your blood pressure. One of the main reasons why people have high blood pressure is because they’re stressed out all the time. And with cardiovascular diseases killing so many people every day isn’t it sad that our culture is making us so stressed out?

Wouldn’t it be better if instead of prescribing statins for everyone over 40, we instead focus on the underlying factors that cause these cardiovascular problems? Since societal change is something that’s out of reach for most of us – it’s a better idea to start with yourself. Go and make that positive change in your life. Take that quiet moment at night and make sure that you are taking the right steps so that you can live a healthy life.

If valerian root works so well – why drink tea with it instead of taking a supplement?

A question that some people ask after reading about these benefits of taking valerian root is why not just take a supplement instead of drinking tea. Well, it’s a good question and I’d like to quickly elaborate on why drinking Nighty Night Tea is a better choice in 9 out of 10 cases.

If you’re more interested in taking pure valerian root as a supplement, then you can find that here.

Other uses of Nighty Night tea

You might be wondering if you can also drink the tea on any other moment of the day. After all, if it helps you combat stress wouldn’t it be a good idea to drink it at work on a hectic day? Wouldn’t the tea make you sleepy? I would recommend keeping this tea only for evenings, since it’s designed especially for that. However, if you like the taste and could use some of its calming and anti-stress effects during the day, feel free to brew yourself a cup any time. 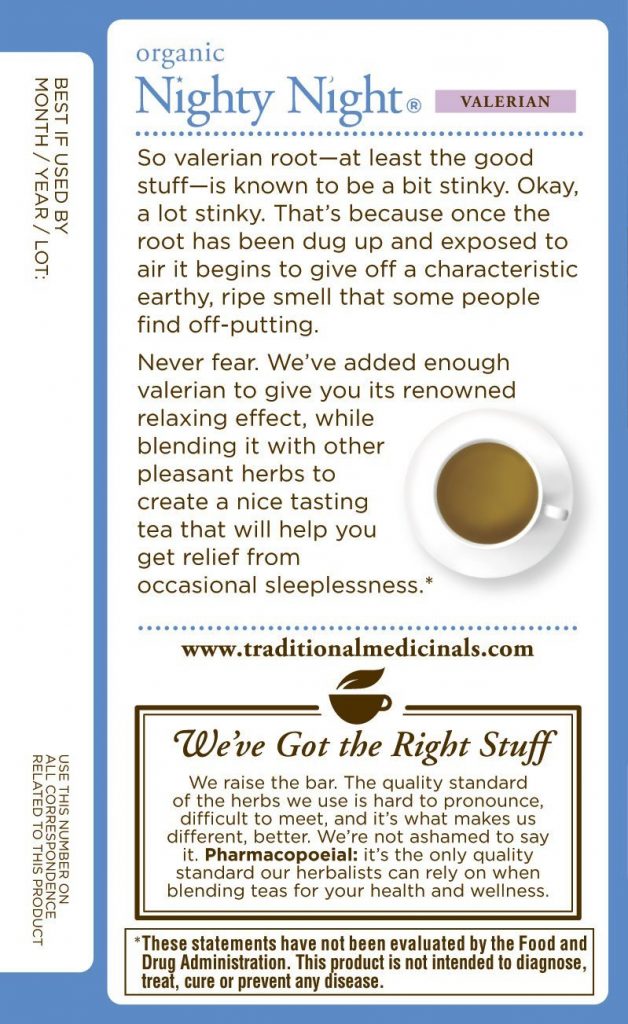 So should you try Nighty Night tea with valerian?

Well, if you find that you can’t fall asleep as well as you used to at night, then brewing a cup of Nighty Night tea with valerian might just be the thing that you need. Especially if you can’t fall asleep because of stress or because you can’t seem unwind. Brewing a cup of tea is inherently relaxing and taking the time to sit down and unwind will soon become a staple in your life. Add to that the beneficial relaxing and sleep-inducing effects of valerian root and I cannot think of any reason not to try it.

Here’s where to get Nighty Night Tea with Valerian

If you’re curious where you can order Nighty Night Tea, then I recommend you check out Amazon. It’s one of the easiest ways to get this tea delivered to your home. So that you can quickly start to discover the beneficial effects that this delicious tea can do for your sleep!